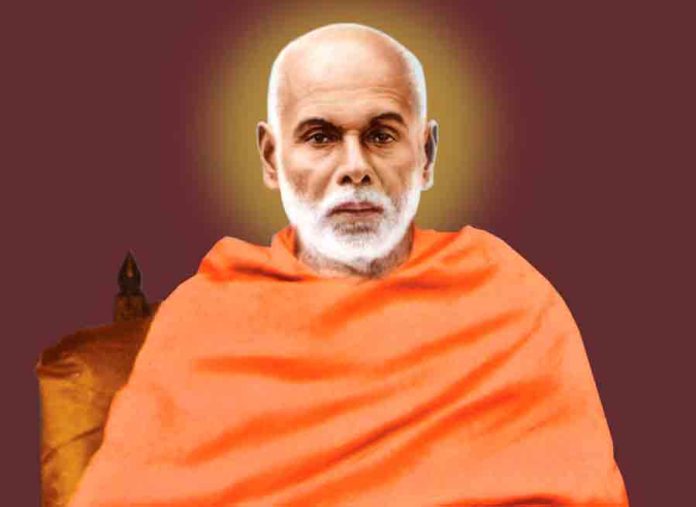 important teachings of Sree Narayana Guru which have  universal relevance are the following:

2) “One in kind, one in faith, one in God is man, of one same womb, one same form, difference none there is at all”

3) “Whatever be the religion of a man, it is enough if it makes him virtuous”

IMPORTANT DATES IN THE LIFE OF SREE NARAYANA GURU

1901 Declared as a sublime Religious Reformer through the Govt. Census Report.  By this time, Guru’s name had spread from Kanyakumari to Mangalapuram.

1904 The Govt. exempts the Guru from appearing in courts. Ayyankali visits the Guru.  Founding of Sivagiri Mutt.

1905 The first All India Industrial and Agricultural Exhibition at Kollam on the third anniversary of SNDP.

1916 The Guru’s Shashti Poorthi (60 Years) celebrated all over  Kerala, and in places like Madras, Bombay, Kolkatta, Coimbatore  and Madhurai and in other nations like Singapore, Sree Lanka, Burma & Malaysia.  Declaration that he has no caste.  Meeting Ramana Maharshi  at Thiru- annamalai.

1918 The first visit to Sree Lanka. The Guru wore saffron clothes for the first time. Founding of 42 night-schools in Sree Lanka and Vignanodayam Sabha in Colombo.

1921 Installation of plaque with Satyam, Dharmam, Daya, Shanti, written on it.

22.11. 1922 Viswakavi Ravindranath Tagore and C.F.Andrews visit the Guru at Sivagiri.

Medam 20th Registration of the Guru’s will.

12.03.1927 Installation of the Guru’s metal statue at Thalassery  by Bodhananda

14.06.1927  Installation of mirrors with Om Santhi at Kalavamkodam

May  Rest at Sivagiri

May 20th  Nataraja Guru was sent abroad for higher studies

These books could be categorized into five. They are